Reduce, reuse, recycle, the mantra of the well-intentioned, main stream, quasi-environmentally aware. Recycling used to be something only the rabid tree-huggers did, now, if you live in a community with a recycling program and you don’t recycle, you’re the talk of the neighborhood.

I’ve recycled for years. First, for money. I swore, for many years, that my Coca Cola habit was going to fund my children’s’ college education. Then I became a scout leader and we recycled to offset some of our extravagant troop outing expenses rather than save for a Stanford education for my two prodigy. Eventually, I gave up soda, entirely. And financed my children’s education.

Later, I recycled out of a sense of duty. The county I lived in provided us with a plethora of stackable bins; one for certain types of paper, one for certain types of cans, one for certain types of plastic and another for certain types of glass. Not only were we reading the ingredients of the food within the can, but also the ingredients of the composition of the can, itself. This worked out well, for a while. I’d dutifully separate out our trash and place it in the respective receptacle and once a week, on the appropriate night, I’d drag all the bins to the curb to be emptied in the morning by some poor man driving a truck who would painstakingly stop at each participating household and empty each of the color coded bins into the appropriate sector of his very special truck, which I’m sure cost the taxpayers way more than the redemption value of our recyclable garbage. We lived in a small home at the time, and the bins were quite formidable, size wise, so they were relegated outside. This was great, until it rained and no one in the family wanted to go out in the muddy driveway to throw crap in the appropriate bin. So the crap piled up on the counters and every other empty flat surface until such time as it was sunny, dry and someone had a half an hour to schlep stuff out and sort it into the bins. The bins that were now full of soggy trash swimming in several inches of brackish rainwater. Soon the bins were abandoned for their original purpose and became tool totes and, overturned, stools and seats for gardening and car tinkering. I don’t think our experience was unique, because it wasn’t long before the county introduced curbside “mixed recycling”, at which point, recycling became a necessity.

With the curbside “mixed recycling”, the county provided a very large recycling container, like the rubbish container, with wheels and a lid and all, and they swapped out our big wheeling rubbish container for an itty, bitty, diminutive, deal. If you “required” the larger size, your bill would be appropriately larger, too. Suddenly, we recycled everything, and if there were any question as to whether an item to be discarded were truly recyclable or not, we just pitched it in the recycling bin and let someone at the county decide, upon receipt of said item. Or items. Like they were going to be able to tell who threw what away once the contents of an entire neighborhood’s bins were all upended into the big truck.

Some years later, I lived by myself in a very nice, luxury apartment complex. I hadn’t lived in an apartment since the very first years of college, eons ago. Way before recycling was mainstream, what you didn’t want, you simply threw away and off to the magical landfill it went. Now, though, there were multiple dumpsters, one for “trash” and one for “mixed recycles”, in which I saw things like broken patio furniture, automobile fenders and televisions. And in the “garbage” dumpster I saw glass bottles, aluminum cans and newspapers. Sigh. I did my part, dutifully, and according to the posted instructions.

After leaving the luxury apartment complex, I lived with my son, who was twenty-one at the time. His roommates had all transferred to far away schools and he was left with the house, the lease and a couple of empty bedrooms. Being the “cool mom”, I was invited (he may have begged a little) to move in. Back to the “curbside mixed recycling” with the big bin with wheels. I was reliving my youth, my son was twenty-one, and there wasn’t a recycle bin big enough for the number of glass bottles we discarded in a two-week period. Its’ a good thing we worked out at the gym regularly, because it took both of us to negotiate the overladen recycle container, weighing more than the gross vehicle weight of some cars I’ve owned, I’m sure, down the sloped driveway, safely, to the curb. When the truck came by to pick up the can, I swear I could hear the motor that powered the mechanical arm strain with the heft of our burden, and, once successfully overturned, the crashing of glass resonated through the early hours of dawn, clearly heard for a square mile, I’m sure. Neighbors wouldn’t make eye contact with us. Not sure why, but I could guess.

My son moved out to live with children his own age. Which was good. I moved “home” to help my elderly mom as she tries to figure out what to do with my childhood home and her deteriorating health. It is weird being “home”, back in my old room, as an adult. I can drink openly. But I still feel judged. If I have a beer AND a glass of wine, my mom has that wide-eyed, alarmed, expression she gets when she watches too much network news. Panic is how I’d describe it. Little does she know, or perhaps I don’t have her fooled, but I usually drink two beers and two or three glasses of wine, but only on tough days, like Mondays, and on days when I’m cutting loose and enjoying life, like Friday, Saturday and Sunday, and on those non-descript days, like Tuesday, Wednesday and Thursday. I generate a fair amount of recyclable glass.

I grew up in a typical suburban neighborhood, and while Mom is one of the few “original” residents, most of our “new” neighbors have been here for decades and are “older”. And wiser. And a tad bit nosy about one another’s business. I don’t want to sound like I’m flattering myself, but I live large, by comparison, and I feel as though I am under constant surveillance and scrutiny. I come and go, stay away for weeks at a time, return home shortly after bars have closed, make a few attempts to park my car straight in the driveway, arrive by taxi, or, worst of all, leave for the evening by taxi. Not that it matters, in the least, but still.

The problem, then, is the fair amount of recyclable glass. The recycle bin is quite large, over half my height, three-quarters my mom’s height. Tossing an empty glass container into such a cavernous void causes a racket that, even with hearing aids turned down, the neighbors are sure to hear. And I think recognize. I’ve become so keenly aware of this fact, that when the container is empty, I lean way over, as far as I can, to discard a beer or wine bottle. Or both. But, even leaning way over, into the container, when it is empty, the bottle must free fall about eighteen inches. Drop a bottle eighteen inches into a cavernous, plastic bin and the resounding noise and echo is quite fearsome. And recognizable. For at least a block.

Then there is the problem of the recycle bin NOT being empty, but, rather, being half full of, well, recyclable glass. The racket is indescribable. And recognizable. This is Napa, you know, famed wine region of the world, yet, it would seem that no one on this block is doing their part to support the local economy. Unless of course, they are imbibing in boxed wine. Or have a whole barrel in the garage. Who knows?

Another wrinkle in the whole unofficial neighborhood watch program is that we are nearly surrounded by cops, ex-cops, cops married to cops, cops married to ex-cops, and ex-cops married to ex-cops. So, when I toss a bottle or two into the recycle bin and grab the keys to my car, I practice reciting the alphabet backwards while walking a straight line, heel-to-toe, as I head towards the front door to get in my car, even if the bottles I discarded were from the previous night and I’m 2,000% sober.

The reckoning comes on Thursday. Early. The trash trucks thunder up and down the street on Thursday mornings. There are at least three, though at 7:00 AM it sounds like a fleet of thirty. Especially after a “non-descript” Wednesday night. Wink, wink. I wake up, dread overcoming me, as I hear the truck lurch up the street, stopping at one house, the next, the next. I have no way of knowing whether it’s the garbage truck, the yard waste truck, or the recycle truck, until the recycle truck reaches our house, “clink, clink, crash, clink, crash, clink, clink, crash …” Groan.

A strategy is necessary.

My second strategy; about once a week, Mom throws away about fifty pounds of newspaper and junk mail, which I find puzzling because there always seems to be a one-foot high stack of the stuff on two of the four chairs around the kitchen table and another two-foot high stack on her desk. Perpetually. I’m afraid my mother is responsible for much of the deforestation of the planet. But, to my delight, once the papers have been discarded, I can toss glass adult beverage containers into the recycle bin from ten feet away, with a flourish, and make not a sound. I’ve also found that I can carefully bury bottles between layers of newspaper and junk mail, which is a double benefit; no noise when placed in the recycle can and unless my mom gets on a step ladder and lowers herself into the recycle bin, she won’t see most of what I’ve discarded. But, the newspaper and junk mail rarely make it to the can until the afternoon before pick up. That means I have to stash my empties somewhere until then and discard them all at once. This presents two possible problems; Mom finding my stash of empties and thinking I consumed all of that in one night, first, and second, carrying all that down the stairs and out to the can, past her recliner, undetected. I’ve found that during Chopped, or Shark Tank, to be my best opportunity for discarding a large burdensome bag of bottles without her usual overzealous inquiry and inquisition.

Another strategy is Amazon. If I make a habit of ordering something from Amazon, once or twice a week, then there cardboard to be recycled, providing sound deadening matter in the echo chamber also known as the recycle can. While this may sound extreme, and expensive, a membership to Amazon Prime has, at least, cut my shipping costs, so I can still afford premium micro-brews.

But, alas, however many pounds of newspaper, cardboard, and junk mail are wrapped around my bountiful bevy of bottles, Thursday morning is always a time for atonement. 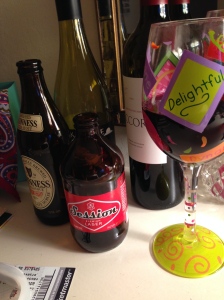 Empties. And fulls. What to do? A strategy is necessary.

But, as it is Tuesday, a “non-descript” day, I am moving from beer to wine as I wine’d down for the evening. Tomorrow, I will figure out how to discard of my empties and how, hopefully, to deaden the din come, Thursday morning.