So I Met This Guy. What a Catch! 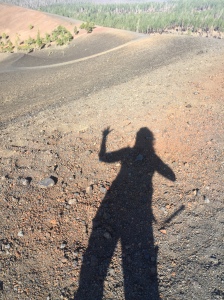 An early morning beer atop a pile of lava rock in the middle of the forest, it’s the last day of my solo birthday adventure. I took a few hundred pictures, a few elaborate selfies, walked the rim of the “cone”, and headed very quickly down the rocky path. As I strolled back to the car, I met several groups of hikers heading out to enjoy the views. It was getting sunnier, and hotter, and I was pretty glad I’d tackled the hike in the comparative coolness of morning. Back at my car and moving, again, I had only one more “thing” to cross off my birthday adventure checklist.

I beat the crowds to the main entrance of Lassen Volcanic National Park. I waved my receipt out my window and was nodded on by the grouchy looking kiosk attendant. I returned to the camp store at the Manzanita campground and bought a single IPA, my favorite of the few local offerings I’d sampled. My lunch was packed in the little soft-sided cooler I take on my kayak. I tucked the beer in with the salmon and grain salad. I found a parking spot near the boat ramp and unloaded my kayak from the roof rack on my car. I grabbed the few things I wanted to take with me. It wouldn’t be a long paddling excursion, just a quick paddle around a lake I hadn’t yet explored, and one that came highly recommended on a kayaking blog I’d perused in planning my adventure. 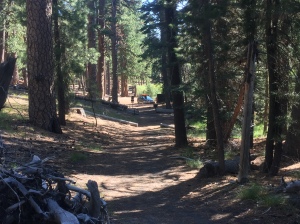 The shore was crowded with kids and families. The picnic tables were all occupied. There were kayaks for rent and the purveyor was busy issuing the required life vests to paddlers before they headed out on the water. I noticed a sign, “no fishing from the shore”. While part of my birthday adventure was to practice some fly-fishing with my new gear, I hadn’t really incorporated it into my plan for the last bit of my time here, today. I had not even looked up the “fishability” of this body of water. How remiss of me. 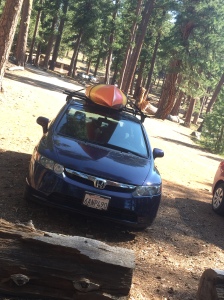 I left my kayak near the shore and parked my car in a sanctioned parking place. I returned to my kayak and tried to make conversation with a man unloading a kayak identical to mine from his truck. He grumbled at me, grumpily, “it’s not mine, it’s my fathers.” Okay, then. Sometimes I feel like an overly friendly golden retriever puppy. I’m happy to meet people, happy to have a brief exchange, and, every now and then, I meet someone who isn’t tolerant of overly friendly golden retriever puppies. Like a puppy treated sternly, I sort of skulked off, tail between my legs. I pushed my kayak into the water, lowered myself in, and pushed off. After about two strokes of my paddle, the grumpy man was forgotten.

Manzanita Lake is beautiful. In the review I read, it mentioned paddling serenely in the midst of Lassen Peak. I paddled, looking to the right, looking to the left, and, finally, mid-lake, I turned around. There it was, majestic; it rose above the lake, appearing close enough to touch. I peered up to the rock outcropping near the very top. Yesterday morning, I sat on that rock outcropping, amidst an army of German tourists, for a full hour, and watched over the world, pondering the larger questions in life; like “what the hell are they all talking about?” and “how can sounds like that actually mean something?” Amazing.

I paddled slowly, lazily, around the edge of one half of the lake. It was lovely, but every inch of shore was crawling with people. The park visitors’ center was at one end of the lake and the largest of the park campgrounds at the other. The busy park thoroughfare bordered another edge of the lake, and the picnic table strewn beach, the other. Still, in the middle of the lake, it was peaceful and lovely.

I drifted in the middle of the lake, looking up at Lassen Peak, and pulled my lunch bag out from between my feet under the bow of my tiny, plastic, vessel. I had the last of a smoked salmon filet, sent dutifully from Alaska. Much appreciated. I also had my homemade “BBQ salad”, a mix of bulgur, barley, and quinoa, with chopped kale, spinach, and other sautéed vegetables stirred in, and some Meyer lemon juice as dressing. The lemons, of course, coming from my mother’s legendary and prolific Meyer lemon tree in the front yard of the house. I popped open the beer I bought at the camp store and I was instantly in lush/gourmand/adventurer/hedonistic bliss!

I finished my floating repast and paddled to the other side of the lake to explore the other coves. I found a wonderful spot where a fallen tree lay under water. A few branches rose above the surface and birds rested there. Between the fallen tree and the shore grew lily pads, abloom with fine, tiny, pink flowers. I remained in that spot for a while, watching all around me, not nearby, not far away, fly fisherpeople. They were afloat in canoes, kayaks, and those ingenious tubes, like a larger version of what I used to put my babies in when at the pool. The feet protrude from the bottom and are adorned in flippers, like a scuba divers. There are places to stash your flies and other equipage, and you just paddle yourself about the lake with your finned feet, much like a duck, and fly fish. I am carefully observing everyone’s casting; the back cast, the forward cast, the loop. The epiphany I had, right then and there, was that these people were no better at fly fishing than I. Fish jumped out of the water to the left of me, to the right of me, in front of me, behind me. The lake was like popcorn with fish jumping out of the water, and, yet, I observed not one person reel a fish in. Not one. And their casting looked like all the pictures in my handy book of “what not to do”. 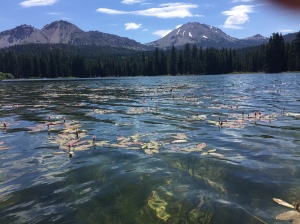 I had observed a bumper sticker on the tailgate of a rather beat up truck in the parking lot. It read, “It’s not the fly, you just suck”. I was a little intimidated by the apparent expertise and grace of this truck owner’s fly fishing acumen, whoever he was, wherever he was. Or she. After watching all the fisherpeople on the lake for a while, one stood out. Stood out as in far eclipsed every other fisherperson in skill, grace, and looping. He stood (yes, stood) in an old aluminum canoe, it was about as beat up as the pickup truck I’d noted in the parking lot. The man clenched a cigar in his teeth and occasionally sent gray plumes of smoke into the clean, clear, air. He was probably not older than forty, I’d say, from my somewhat compromised vantage point amidst the lily pads, behind the fallen tree, festooned with chirping birds.  I watched him intently, back cast, forward cast, toke, toke, toke. But, for as adept as he appeared, I never did see him net a fish.

I explored the last bit of the lake, and as the time drew close for me to depart towards home, I paddled toward shore. As I reached the shore, from the low vantage point of a kayak on a lake, I looked up at a license plate of the rather beat up truck with the bumper sticker I’d noticed earlier. It was being loaded with kayaks and fly fishing equipage. The license plate frame, though dusty, worn, and quite faded, was from a Napa auto dealership. I stepped up from my kayak and onto terra firma. Two older men, as in older than me, were busying themselves around the Napa truck with the impolite bumper sticker. As I dragged my kayak up onto the shore and out of the way of others wanting to use the ramp, I met one of the men affiliated with the old truck. I asked, in my chipper, overly friendly golden retriever puppy manner, “So, are you from Napa? I couldn’t help but notice your license plate frame.” The man smiled broadly and replied, “Yes, I am!” I answered, enthusiastically, “So am I!” We chatted for a moment. I asked if they’d caught any fish. The man smiled broadly, again, and proudly declared they’d caught a few nice ones. What a catch! Since in the hour or so I’d been out on the lake, surrounded on every side by very determined fisherpeople, I didn’t see one fish caught.

I loaded my kayak atop my car. I was becoming anxious to get home. I had spoken with my sweetie from atop Lassen Peak the morning before, the only place in the park I had cell reception. He’d suggested a night out, in Napa, to celebrate my birthday. I was super excited. I lashed my kayak down tight, as always, and headed home. I may have exceeded the speed limit a bit, here and there, or, perhaps the whole way. All I know is, when I got home, the kayak was kind of diagonal atop my car. It wasn’t loose, at all, it was lashed as tight as could be. I just think traveling 300 miles at speeds in excess of 80 miles per hour, with a prevailing wind coming from the west, was a little more than even the tautest straps could manage. 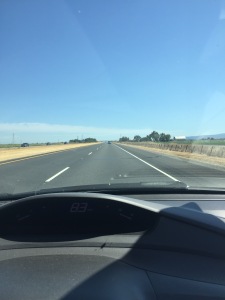 After summiting peaks, paddling lakes, fly fishing, camping, climbing lava mounds and having the best birthday imaginable, I found myself in my prettiest dress, in a great Napa restaurant, nibbling on food perfectly prepared, in an actual kitchen, by well-renowned chefs, sipping on some of Napa’s best wines, in the company of my great guy! 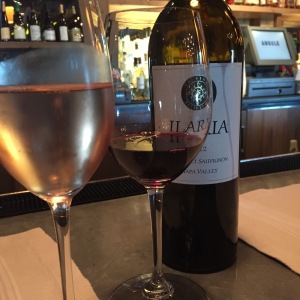 So I met this guy, once upon a time! 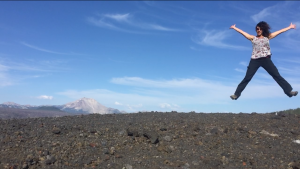